Back in early 2005, researchers noticed seaweed reduces Alzheimers disease in elderly patients and wondered if people who regularly eat seaweed were less likely to develop AD. A formal research program was started in 2009 in China.

By 2019, a new drug,  extracted from seaweed was approved. Clinical trials show effectiveness in treating mild to moderate forms of the disease, and it may even improve cognitive function. The news immediately drew worldwide attention, and suspicion ensued. Is it possible that a discovery coming out of China—whose biotech industry is just taking off—could succeed where seasoned researchers from the likes of Biogen and Eli Lilly have failed miserably?

What We Now Know

Despite the tremendous efforts made in the treatment of Alzheimer’s disease (AD), the past decades have witnessed the continuous failure of β-amyloid (Aβ)- or tau-centric therapeutic strategies in late-stage clinical trials. Only 1 out 200 promising drugs with animals translated to any positive improvements in humans.

There are two promising areas of research and they both involve seaweed. The question is how does seaweed reduces Alzheimers Disease. When researchers talk about AD they often use a term called an axis of Brain-Gut-Microbiota.

The diagram of this “pathway” (from Kowalski and Mulak) is below. Note that it all begins in the gut. 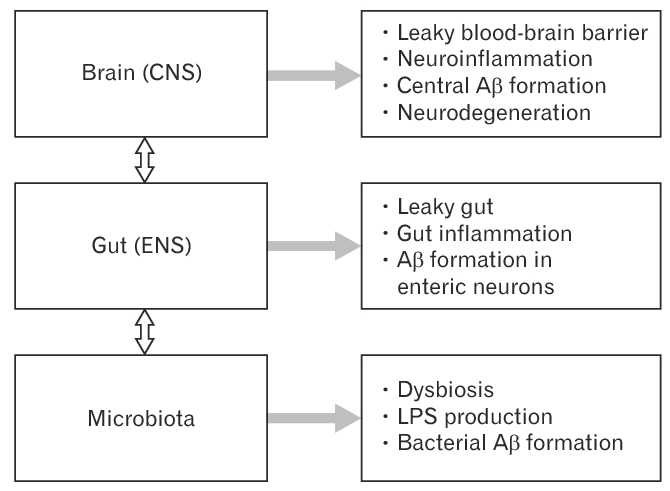 Disturbances of the brain-gut-microbiota axis in Alzheimer’s disease. Disturbances along the brain-gut-microbiota axis, including the central nervous system (CNS) and the enteric nervous system (ENS), contribute to the pathogenesis of Alzheimer’s disease. The gut microbiota is known to upregulate local and systemic inflammation due to lipopolysaccharides (LPS) from pathogenic bacteria and synthesis of proinflammatory cytokines. Alterations in the gut microbiota composition may induce increased permeability of the intestinal barrier and the blood-brain barrier further enhancing inflammation at the gut, systemic and CNS levels. Amyloid beta (Aβ) formation takes place in the ENS and the CNS. In addition, a large amount of amyloids is secreted by the gut microbiota.

Disturbances along the brain-gut-microbiota axis may significantly contribute to the development of neurodegenerative disorders. Alzheimer’s disease (AD) is the most frequent cause of dementia – with progressive decline in cognitive function and formation of amyloid beta (Aβ) plaques and neurofibrillary tangles. We know poor gut microbiota composition increase permeability of the gut barrier. This results in an autoimmune reaction. E.g. Immune activation leading to systemic inflammation, which in turn may impair the blood-brain barrier and promote neuroinflammation, neural injury, and ultimately neurodegeneration. It has been shown in inflammatory disease but has been extended to AD.

However, current understanding of the specific mechanism between the gut and brain in AD progression is still very limited. There will be many claims until further research is done. The figure below shows the 3 separate areas of activity, but it remains unknown which types of infiltrated immune cells are functionally involved in AD development. What are the underlying driving forces that promotes peripheral immune cells to infiltrate the brain, leading to the enhancement of the residential neuroinflammation. Moreover, as we discover the importance of microbiota metabolites, researchers will try to find the specific metabolites that are involved in linking gut microbiota and brain neuroinflammation in AD progression.

This work is one of a whole new area of studies that show the dynamic interaction between the intestinal microbiota and host innate and adaptive immune system. If the gut microbiota are abnormal, they could jeopardize host immune responses and promote the development of various inflammatory disorders. Remember that Prof Jan Villadsen in the arthritis and gut inflamatory responses – same type of response and in this blog post. (Arthritis stopped in its tracks)

It now appears that antibiotics are bad for AD-associated inflammation. Both animal and human studies show an association between dysbiosis of the gut microbiota and the microglia activation during AD development. Minter et al. discovered that perturbations (upset) in gut microbial diversity influenced neuro-inflammation and amyloidosis. Antibiotics-treated mice showed a significant decrease in plaque-localized microglial activation positive for IBA-1. Besides, gut microbiota-produced lipopolysaccharide (LPS) was found in the post-mortem brain samples of AD patients,and peripheral injection of LPS could promote microglial activation.All the evidence suggests that gut microbiota is likely involved in regulating microglia activation and neuroinflammation in AD. Change that microbiome and there is a cascade of other complications.

The media is full of the work of Geng Meiyu and her team at the Shanghai Institute of Materia Medica at the Chinese Academy of Sciences. They suggest that a polysaccharide, oligomannate, a seaweed-derived compound, can reduce AD. The work was supported by Ocean University of China and Green Valley.

Here is Geng Meiyu (bottom left – she worked for 30 years on this. The Chinese Govt has approved the drug GV-971 which was based on a phase 3 trial involving 818 Chinese patients.

According to results Geng presented at last year’s Clinical Trials on Alzheimer’s Disease Conference in Barcelona, a statistically significant improvement between the drug and placebo was observed as early as week four and continued over the course of the trial. After 36 weeks, patients in the oligomannate arm had improved their ADAS-Cog scores by a median 2.54 points more than placebo patients.

Prof Lindsay Brown of USQ showed in super-sized obese mice they could reverse the changes in microbiome back to normal with Sarconema species seaweed.  This was with Sargassum sp and Laminaria sp It may be that the species is not so important as getting the right microbiome.

What is the Cell Membrane?

Here are two images of the membranes in the gut. There is only a few cells between the gut, and the bloodstream.  If this is not functioning correctly, then the blood says “Whoa.  Nasty bacteria too close”. And starts an autoimmune process.

This simple figure (Minter) shows the intestine as a pipe with a cross section. There is really only 1 layer between health and death.

This gut blood barrier is much more complex.  Here is  simple model which shows some of the dozens of cells identified. Within this are many other processes and involve T-Cells, B-Cells, and range of other immunology pathways.

Wang et al in the Nature paper cited below says that this gut blood brain change is what makes the new drug effective. The polysaccharide reconditions the microbiota. The inflammation reduces, and then reduced the nero-inflammation. The work from The Netherlands by Dr Mulder and others (Bogie et al) in animal studies have seen lipids enter the brain, and this reduces inflammation but also reduced the reduction in the brain size which is also a symptom of Alzheimer’ Disease.

In a separate Nature communication commenting on the drug GV-971 Seo (2019) provides a commentary on the paper on GV-971 and how microbiota influences Alzheimer’s Disease.

This mechanism seems to be a consistent finding among Alzheimer’s Disease researchers and why there is continued research on how seaweed reduces Alzheimers disease.

The commercial entity in this new drug is Green Valley.  Green Valley is a pharmaceutical company focusing its primary efforts on developing carbohydrate drugs for patients with complex chronic diseases in areas of central nervous system, cardiovascular, and oncology. Founded in 1997 and headquartered in Shanghai with over 1500 personnel, Green Valley’s business presence in China covers more than 31 provinces/municipals including 2 GMP manufacturing sites and has achieved more than $700 million in revenue in 2018. The company’s product Salvianolate is a top 10 drug for cardiovascular disease in China. The new drug registration application and marketing authorization application for GV-971 has been recently submitted to CFDA for treatment of Alzheimer’s disease.  Their website is http://www.greenvalleypharma.com/En