How can the gut and the lungs be linked?

The relationship between the gut microbiota and overall health and wellbeing is now well established. Metabolites from the microorganisms, including short chain fatty acids, trigger changes in metabolic pathways throughout the body. It has previously been shown that gut microbiota can influence inflammation in the lungs [2] and also improved lung function in Chronic Obstructive Pulmonary Disease (COPD) [3]

Prebiotics and Probiotics – the difference.

Prebiotics are also known as soluble fibre. They are foods that dissolve when eaten to create a viscous gel that is readily digested by the good bacteria in the colon. This type of fibre is found in legumes and fruit. Prebiotics are different to cellulose rich insoluble fibre which is found in grains and vegetables. These are not digested, but act as bulk to enable bowel movements and prevent constipation.

Probiotics are foods or supplements that already contain a component of bacteria or other micro-organisms. Probiotics deliver bacteria to the lower intestines to improve the ratio of good to bad bacteria. Yoghurt is the most common example of this, but other probiotic foods include kombucha, kefir, miso and sauerkraut.

Scientists from around the world published the study in the Oncology Section of the Journal of the American Medical Association in October 2019.

The aim of the study was to assess the effect of individual or combined prebiotic and yoghurt intake on lung cancer risk. The positive effects from prebiotics and probiotics, specifically yoghurt, have been well documented in the past. Both create health benefits by modulation of gut microbiota and metabolic pathways. However, little research had been done to examine the effect of prebiotic and yoghurt intake on the development of lung cancer.

In this massive study data from 1.4 million participants from America Europe and Asia was collected over a period of 8 years. Scientists looked at fibre intake, yoghurt consumption and other known risks including age, smoking status, obesity and much more.

Pacific Seamoss has a carbohydrate content of 38 percent, of which 34 percent is prebiotic soluble fibre. Pacific Seamoss, like other functional foods, has a wide variety of beneficial health effects because of its high prebiotic activity. It is the metabolites from the good bacteria which cross into the blood stream to create medicine-like effects throughout the body and improve overall health and resistance to disease.

This study suggests that Pacific Seamoss also confers a reduced risk of lung cancer, up to 30 percent if you are a regular yoghurt eater as well.

But I don’t smoke, so I don’t need to worry about lung cancer

“Unfortunately, this is a myth. 45% of females who get lung cancer don’t smoke”

Smoking is still the major cause of lung cancer accounting for about 90 percent of cancers in males but only 65 percent in females. Secondhand smoke is also a leading cause. But there is a high percentage of lung cancer cases that have no known origin and may be genetically linked or just related to getting older.

Lung Cancer is the Leading Cause of Cancer Deaths

Lung cancer is the 4th most common cancer but the most deadly. While more people are diagnosed with other cancers, including breast, colorectal, skin and prostate cancers, lung cancer is the deadliest with about 9,000 people dying each year in Australia and about 12,000 new diagnoses each year. [4]

The following figure shows that most people are not diagnosed until they are at stage IV, and the 5-year survival rates are terrifyingly close to zero at 3.2%. If diagnosed early as few are, then survival is about 65%.[4] 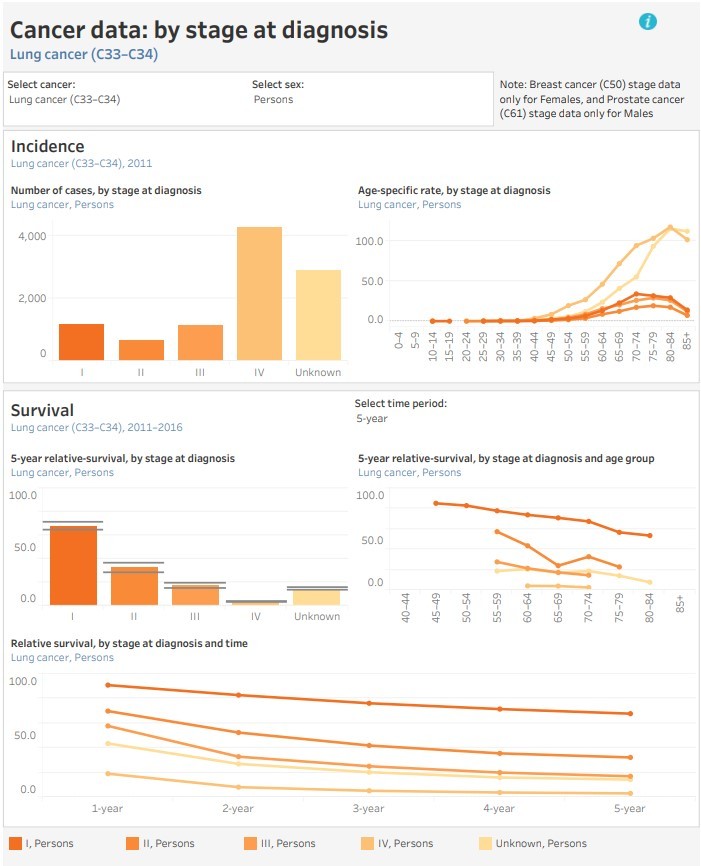 The 10 most common cancers are shown in the Table below.

Seaweed Protects Against Lung Cancer – What We Recommend

The ratio of good to bad microorganisms in the colon changes when we change our diet. This study showed that daily consumption of prebiotic soluble fibre will reduce lung cancer risk, and this effect will be greater if a probiotic is also consumed.

We recommend a daily intake of the functional food capsules of Pacific Seamoss because seaweed protects against lung cancer and therefore while it has maximum prebiotic benefits, it also has high nutrient and nutraceutical content. Add your favourite low sugar yoghurt to your diet and not only are you enjoying your food, you are doing something positive for your long term health.

Both your gut and your family will love you for it.